Rabbi Mordy graduated high school at Yeshiva Schools of Pittsburgh, and studied in London, England, and Tzfat, Israel, before receiving his Rabbinic ordination from the Rabbinical College of America at Morristown. He initiated The Friendship Circle together with his wife Rivkee, in September 2006.

Born and raised in Pittsburgh, Rivkee Rudolph graduated from Yeshiva Schools, then studied at Seminary Chaya Mushka in Israel. She began her professional life as a pre-school teacher, first in Pittsburgh and then in New York. In 2006, Rivkee founded The Friendship Circle of Pittsburgh, where she has served as its Director ever since. She is singularly focused on and is largely responsible for Friendship Circles’s basic philosophy: all members are equally welcome and lines between abilities should be blurred as much as possible. Her commitment to executing this philosophy throughout the scores of programs and events FC sponsors has enabled the organization to become an integral part of both the Jewish and the general community in Pittsburgh.

Adina graduated high school at Yeshiva Schools and continued to study education at Beit Chana Teachers Seminary in Israel. She has much experience coordinating programs for summer camps and Hebrew schools before joining the Friendship Circle team in 2013.

Gila joined The Friendship Circle of Pittsburgh in 2016 to continue her passion for social service. Before moving to Squirrel Hill in 2013, Gila worked in various communities in states such as Illinois, Florida, and New Jersey. Previously, she has worked for various organizations, including the University of Illinois Chabad Center for Jewish Life, The Friendship Circle of MetroWest New Jersey, and the Haifa Rape Crisis Center in Israel. Most recently, Gila has served the Pittsburgh Jewish Community through the Chabad of Fox Chapel. With The Friendship Circle of Pittsburgh, Gila is excited to be a part of our growing family and continue working to serve the local community.

Paige recently moved to the great city of Pittsburgh from her hometown of Mount Laurel, NJ. In August of 2018, she graduated from Temple University with her Master’s Degree in Recreational Therapy. After interning for Baltimore City Recreation and Parks and co-leading a recreational group for Temple students with autism, she felt inspired to continue work in an inclusive community setting. Paige believes that people of all abilities should be brought together in their community through fun times and friendship.

Ann was born and raised in the Pittsburgh area. She completed her undergraduate and graduate degrees from the University of Pittsburgh, and her master’s degree is in Public Administration and Non-Profit Management. Working at an organization like the Friendship Circle, which serves the community in such a vibrant way, is why she went to school for non-profit administration in the first place. She is ecstatic about this amazing opportunity!

Leighann grew up in the South Hills of Pittsburgh and graduated from the University of Pittsburgh with a bachelor’s degree in English Writing. She worked as a paralegal and legal assistant for nine years before ultimately deciding to pursue a new worthwhile career. Leighann joined our team in 2018 and is thrilled to combine two passions of hers – writing and community service – in her grant writing and development position. She is thankful to be able to contribute in part to the incredible work FC does for the community and help support its mission of inclusion.

Emily graduated from Goshen College in August 2017 with a degree in P-12 Education. She moved to Highland Park in September as part of the PULSE program, spending a year serving the city of Pittsburgh. Emily is so excited to serve at The Friendship Circle and to help further their mission of enriching the lives of all participants through mutually advantageous interactions.

Cara was placed at The Friendship Circle through an Americorps program called Pittsburgh Public Allies, which is sponsored by CORO Pittsburgh. She is from Chapel Hill, North Carolina and she graduated from the University of North Carolina at Wilmington in May of 2018 with a Bachelor’s degree in Recreation Therapy. Cara is very passionate about working with people of all abilities, and is motivated to work toward decreasing stigmas and advocating for inclusion in her community! Cara loves to eat sweets, shop at Tj Maxx, and hang out with her friends! She is planning on getting her Master’s degree from the University of Pittsburgh. She is looking forward to what is to come while she is the Office Assistant Coordinator at The Friendship Circle!

Drew joined the Friendship Circle team in January of 2020. He’s originally from Havertown, Pennsylvania which is a suburb of Philadelphia. He graduated from the University of Pittsburgh in the fall of 2019 with a Bachelor’s degree in Rehabilitation Science. Drew first came to the Friendship Circle as a member of the Program Staff and he’s so excited to be a part of the team!

Alyssa joined the Friendship Circle in the fall of 2019. She grew up in the eastern suburbs of Pittsburgh, and then attended the University of Pittsburgh where she got her Masters in Applied Developmental Psychology. She has worked in a variety of settings with children and families, most recently working with toddlers in early childhood education. Alyssa is passionate about working with people of all ages and abilities, especially within the Pittsburgh community, and is excited to be a part of the Friendship Circle team!

Ayala joined the Friendship Circle team in August of 2021. She grew up in Squirrel Hill and graduated from Yeshiva Girls High School in 2019. She is currently a student at Touro College, completing her Bachelor’s in Psychology. Ayala was a member at The Friendship Circle throughout her highschool years and was involved with leadership and advocacy within, and outside of, the organization. She is passionate about inclusion, mental health advocacy and empowering youth to take action and make change! Ayala is excited to be back as a staff member and continue to make close and meaningful friendships with our teen members and the greater FC community!

Grace joined the Friendship Circle in September of 2021 as a part of the PULSE program, a year-long service opportunity. She grew up in Maine and graduated from Vassar College with a Bachelor’s degree in English and Psychology. Currently, she is enrolled at the University of Pittsburgh working toward her Master’s in Applied Developmental Psychology. Grace is passionate about fostering the holistic development of children and creating spaces for people to tell their own stories. She is excited to be part of the Friendship Circle Team and can’t wait to make lasting friendships in the FC community! 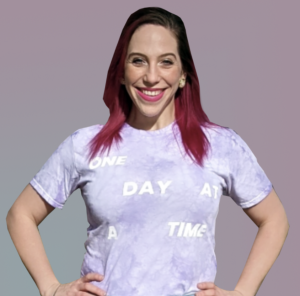 Ally joined the Friendship Circle in November of 2021. Ally is originally from Florida, but moved to Pittsburgh where she received her Bachelors in Psychology from the University of Pittsburgh and her Masters in Clinical Mental Health Counseling from Indiana University of Pennsylvania. Ally is a NASM certified personal trainer and wellness enthusiast. Ally is passionate about ending stigma surrounding mental health, advocating for mental health treatment as a human right, and providing all individuals, of all abilities, with meaningful connection and purpose. Ally enjoys the community and connection of the Friendship Circle, and hopes to make a difference in the lives of each member–and the greater community–in her role as wellness coordinator.

I grew up in Squirrel Hill and attended Winchester Thurston High School. I went to Hiram College in Ohio and studied Sociology, Psychology, and Education, and also played on the Women’s Lacrosse team! I then moved to Washington, DC to attend graduate school at George Washington University and got my Master’s Degree in Higher Education Administration. I then moved to the Piedmont region of Italy and taught ESL to high school students! I now live in the Strip District with my rescue dog, King, a 105 lb Leonberger mix. FC has been a part of this community for so many years and I’ve always admired everything it stands for, and I’m so excited to be a part of that!

Mariel joined the Friendship Circle in the summer of 2022. She is originally from Ann Arbor, Michigan and studied Speech Language Pathology & Audiology at The College of Wooster in Ohio. She has experience in early childhood education and in mental health advocacy for children and teens. Mariel is passionate about community organization and accessible communication. She enjoys bringing people together to have meaningful conversations and learning about what is important to the people in her life. She is excited to create relationships, plan opportunities that are inclusive and fun, and help show the value of being a part of a diverse population. Hoping to spread the importance of the Friendship Circle’s mission, she looks forward to contributing to a more equitable and sustainable world.

Our Board of Directors

Learn more about becoming a member of The Friendship Circle!

What’s so important about the history of fan fiction, you may ask? Aside from possibly helping you on Jeopardy, it makes the concept seem less trivial. If fan fiction as we know it had first come to be in, say, the late 1990s instead of the 1960s, would you really look at it the same? No, and that’s just in… Read More

In my last post, I talked about how fan fiction is something you may hear about without actively searching for it—although frankly speaking, it’s more likely to be discussed on the Internet than in, say, a college cafeteria)—including a mention of creators’ opinions. While some creators are supportive of derivative works based on their stories and/or characters, there are some… Read More

It’s far from uncommon to see pop culture being referenced in everyday life, and especially common to see it referenced in other works (for instance, Marty McFly refers to Darth Vader at one point in Back to the Future). As such, it shouldn’t be surprising that the concept of fan fiction has been mentioned in ‘official’ fiction. Perhaps the most… Read More